October 2020. To mark the fifth anniversary of the founding of Tse Tse Fly Middle East in the UAE we launch our new project: This Is Kafala.  Featuring an album of experimental music and sound art, and an online exhibition, This Is Kafala intends to draw attention to the kafala system of employment that is used by oppressive regimes in the Middle East.  Under kafala (kafala is Arabic for sponsorship), migrants travelling from surrounding regions to work in these countries must surrender all their rights to their local sponsor. The extremes in exploitation that ensue are likened to modern-day slavery, with workers made to suffer unsafe working conditions, long working hours, squalid accommodation, confiscation of passports, low pay, physical and sexual abuse, and torture.  The kafala system affects all migrant workers but particularly increases the vulnerability of domestic and construction workers, and has been condemned by humanitarian organisations worldwide. Despite countries like Qatar (currently using migrant labour to build infrastructure for the 2022 football World Cup) promising reform, migrant workers are still enduring appalling human rights abuses.

For the This Is Kafala project we are proud to be associating with Migrant-Rights.org, the non-profit organisation that advances rights of migrant workers throughout the Middle East.

The This Is Kafala online exhibition is a curated selection of work from artists, illustrators, film-makers and photographers, all of whom have created pieces that respond to kafala and modern-day slavery in the Middle East.
performance & protest
Subash Thebe​​ is a multi-media artist whose work is inspired by future scenarios of struggle, socio-political issues, science/speculative fiction and resistance. Migration, climate change, and indigeneity - or Adivasi Futurism as he calls it - are recurring themes in his works. He is based in Kathmandu and London. Below are stills from Subash's performance - Kafala, 2013 - at the gates of Embassy of Qatar, London.
www.subashthebe.com 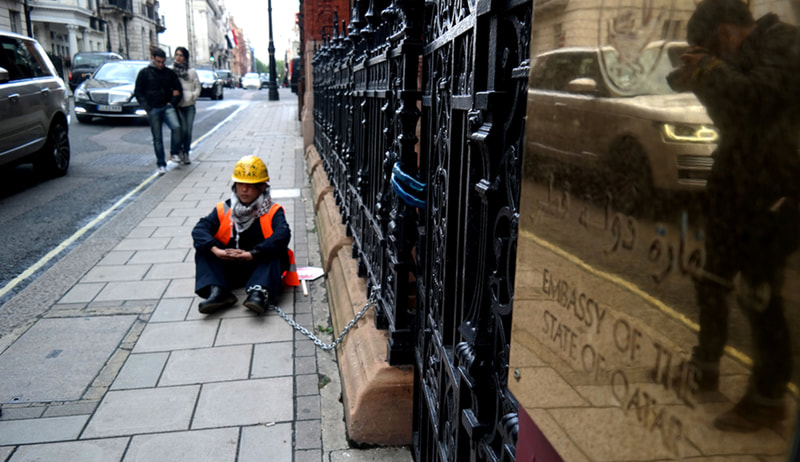 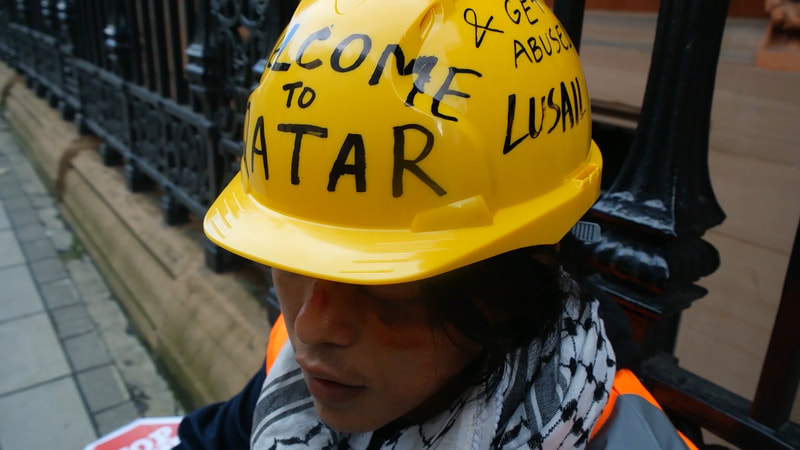 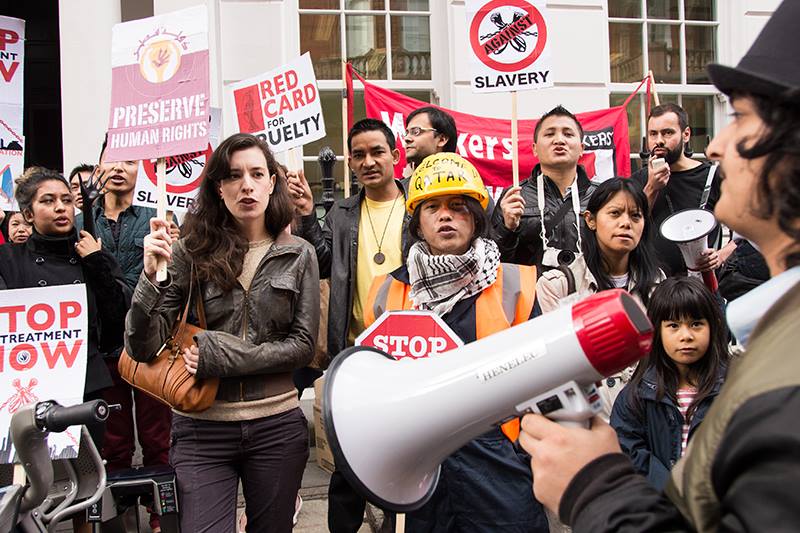 Currently on hiatus, Gulf Labor is a coalition of international artists working to ensure that migrant worker rights are protected during the construction of museums on Saadiyat Island, Abu Dhabi in the UAE. These photographs are from Gulf Labor's 2015 protest at the Guggenheim in New York against the building of the Guggenheim in Abu Dhabi.
www.gulflabor.org 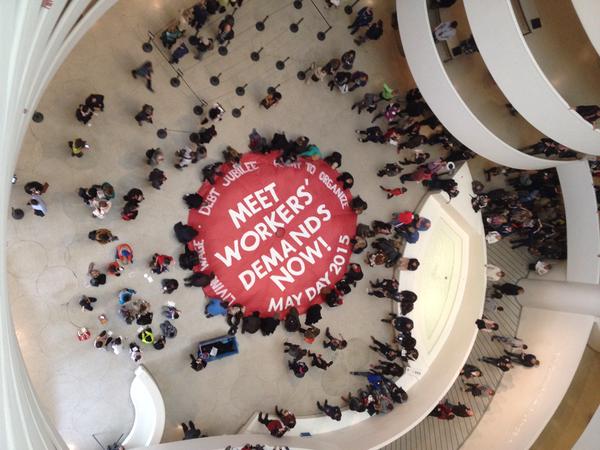 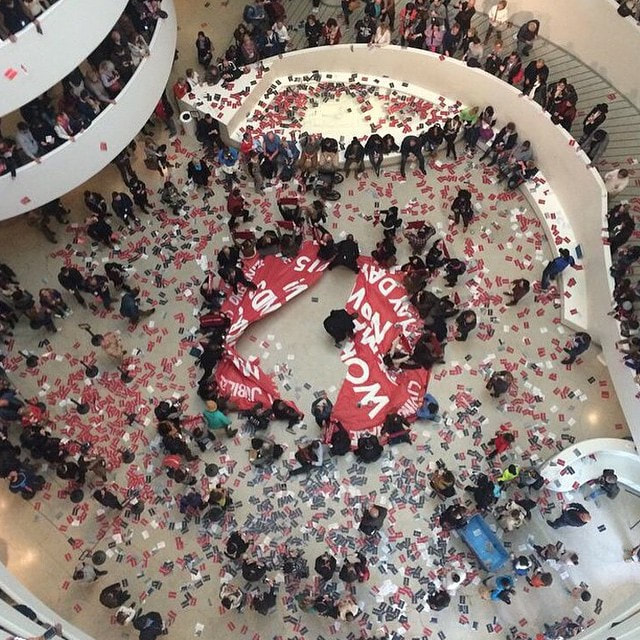 Posters from Gulf Labor’s 52 Weeks project in 2014 whereby artists and activists were invited to contribute a work that related to or highlighted the unjust living and working conditions of migrant labourers building cultural institutions in Abu Dhabi. 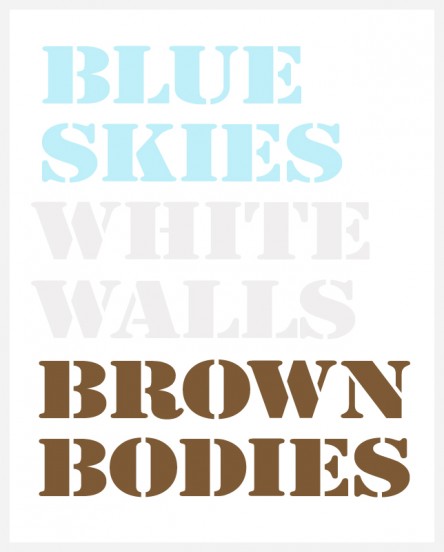 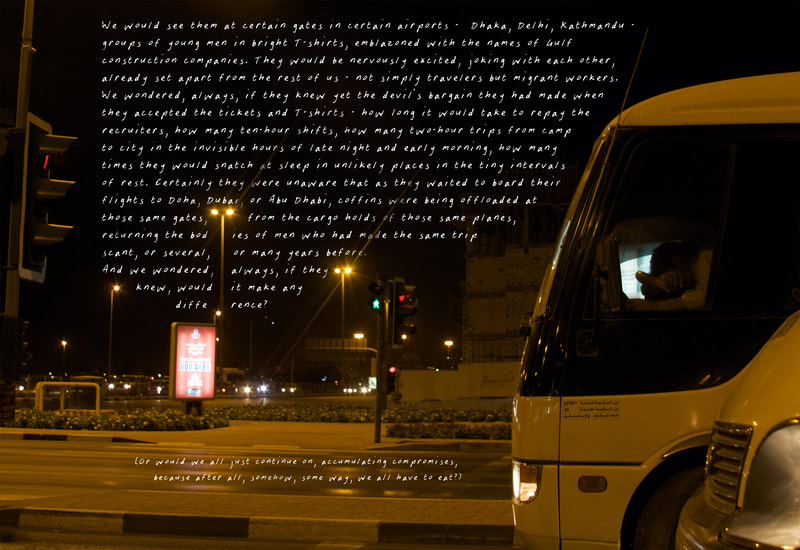 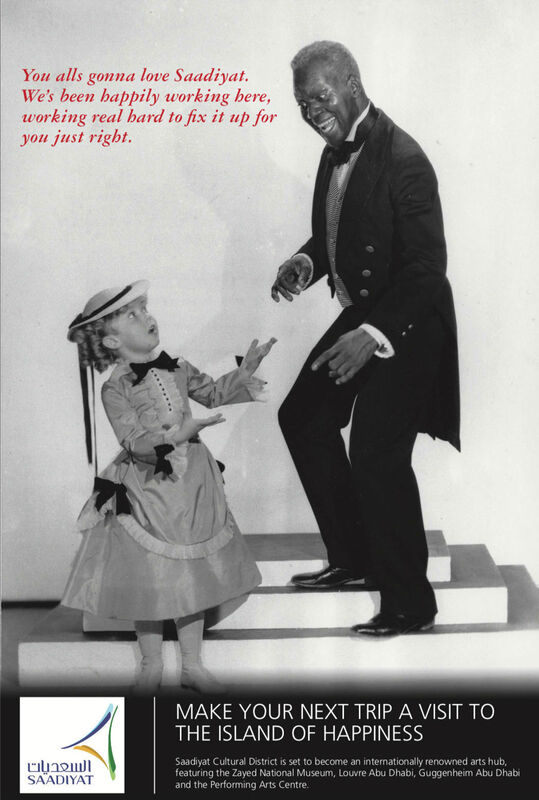 Arcadia Blank is the street artist that created gnomic and thought-provoking text pieces throughout Dubai between 2011 and 2019.  Street art that hasn’t been sanctioned by the Dubai authorities is considered vandalism and is highly illegal. Anyone who creates street art that is both unsanctioned AND political in Dubai will be sent to prison. Blank created We Are the Dream Makers on the wall of one of the many labour camps in Dubai in 2013.
​www.arcadiablank.com 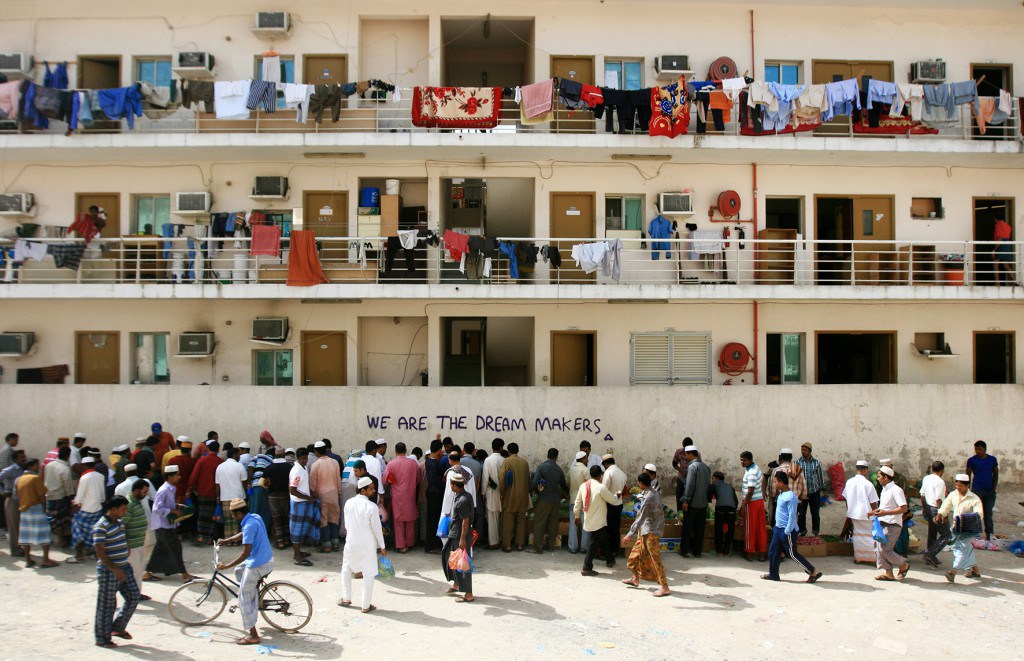 Taring Padi is an art collective based in Yogyakarta, Indonesia that uses art as a tool for political expression and education. Hentikan Kekerasan Terhadap Pembantu Rumah Tangga (Stop Violence Against Housemaids) and Buruh Bukan Budak (Workers Are Not Slaves) are both woodcut prints from 2004.
​www.taringpadi.com 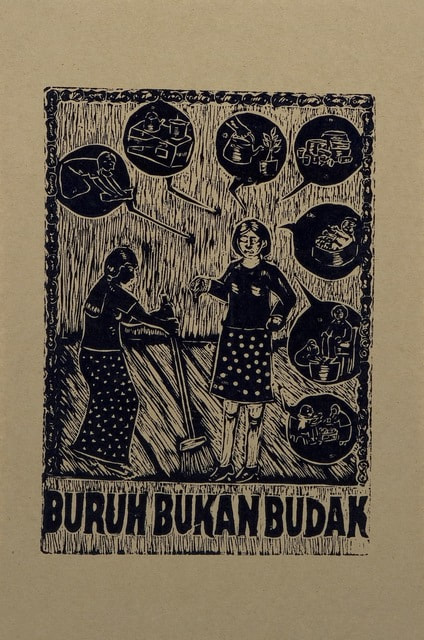 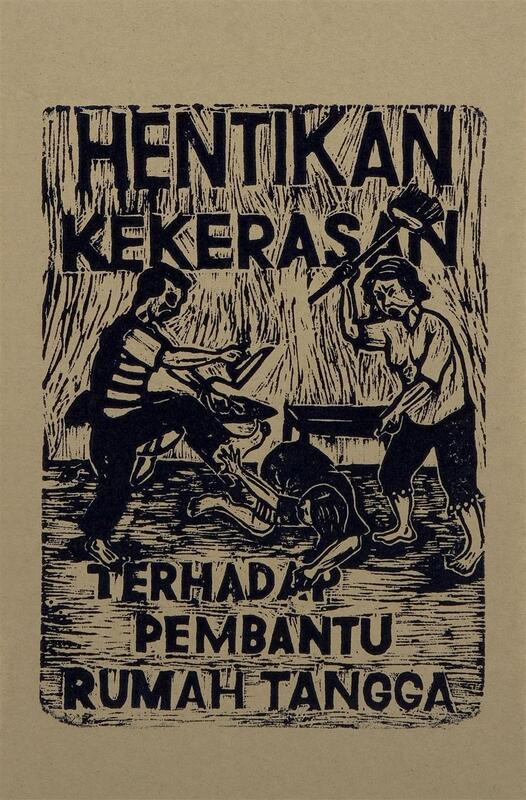 documentaries
artists & illustrators
Rositsa Raleva is an artist and graphic designer based in Sofia, Bulgaria. Her work has been used by Human Rights Watch, the Polish Insitute, Plakat Kombinat and more. 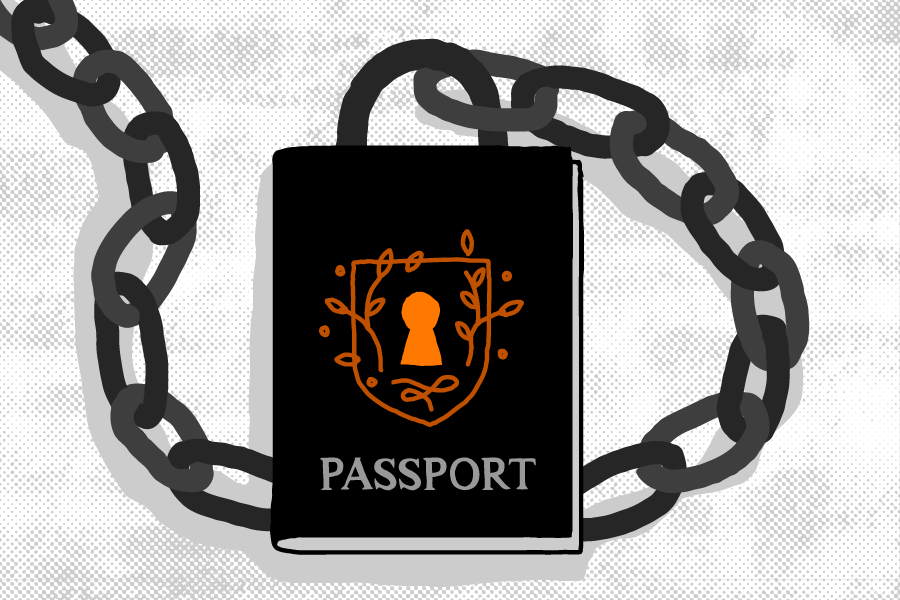 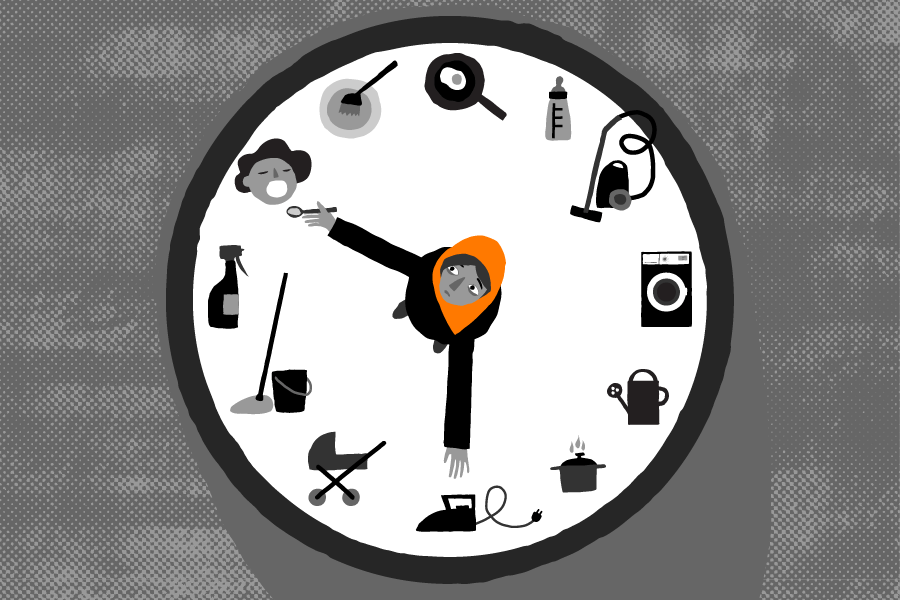 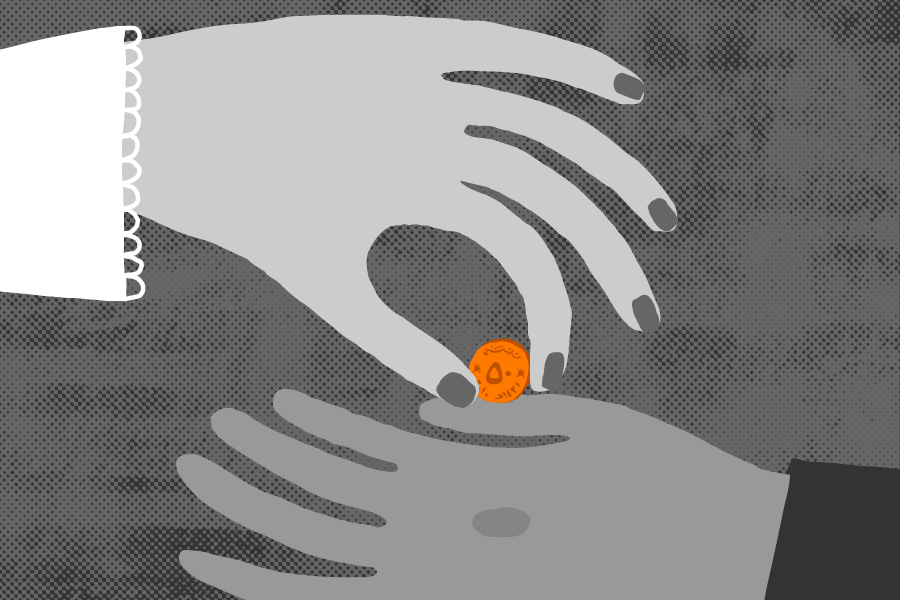 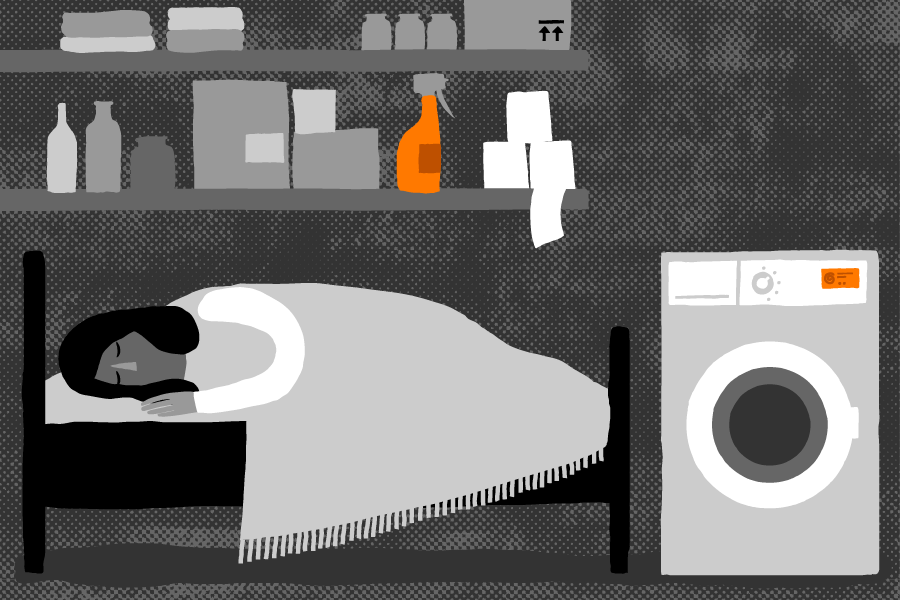 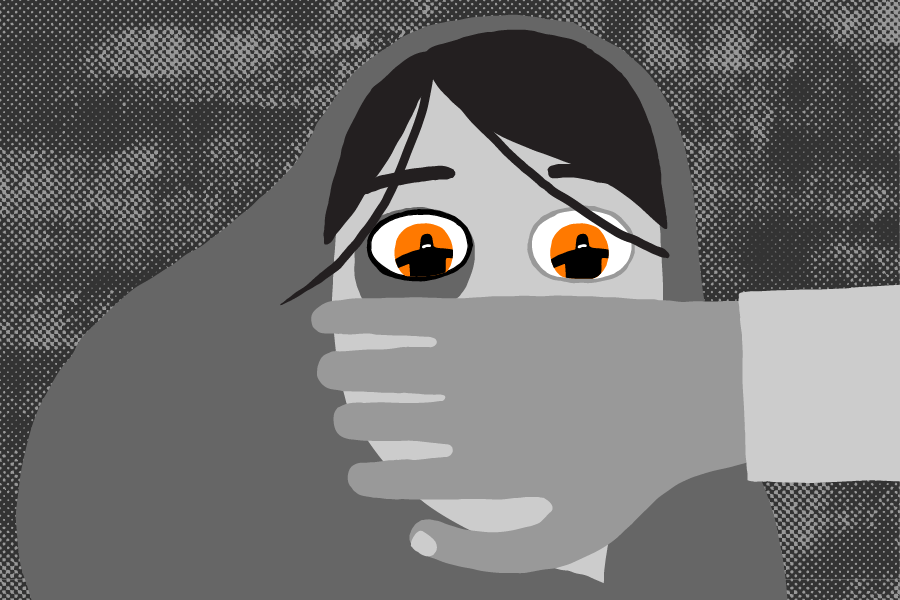 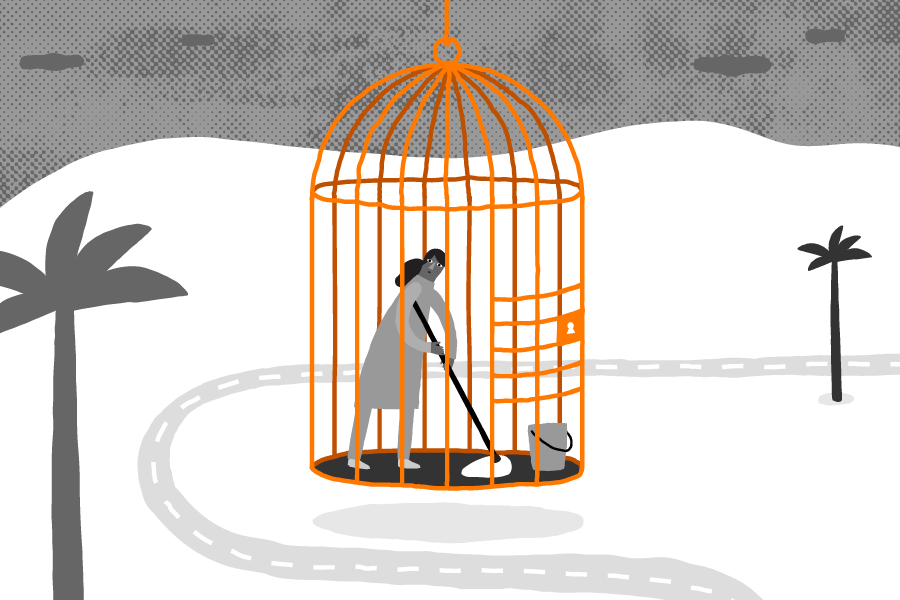 Molly Crabapple is an artist and writer whose inspirations include Diego Rivera and Goya’s The Disasters of War. She is the author of Brothers of the Gun, an illustrated collaboration with Syrian war journalist Marwan Hisham, which was a New York Times Notable Book and long-listed for the 2018 National Book Award.
​
- illustration for VICE website article Slaves of Happiness Island - 2014
www.mollycrabapple.com 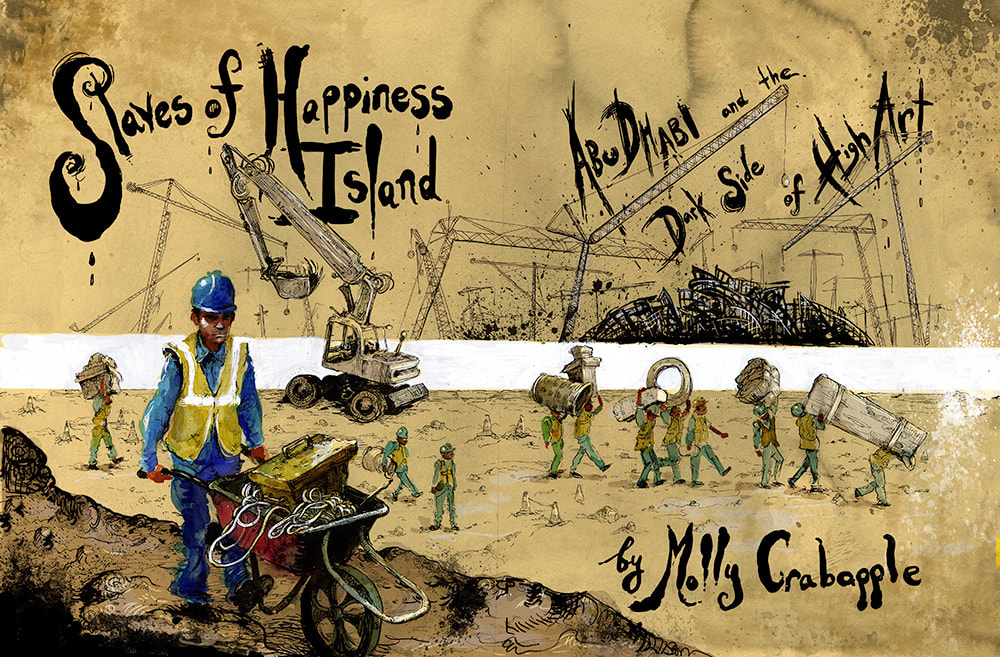 Ryan Inzana is an illustrator and comic artist whose art has appeared in numerous pubications worldwide. Ryan’s comics have been inducted into the Library of Congress in the US, and his artwork has appeared in the New York Times, The Washington Post, Smithsonian Magazine and more.

- illustration for The Nation article Why Are Thousands of Malagasy Women Being Trafficked to Abusive Jobs in the Middle East? - 2014
- instagram.com/ryan_inzana
- www.ryaninzana.com 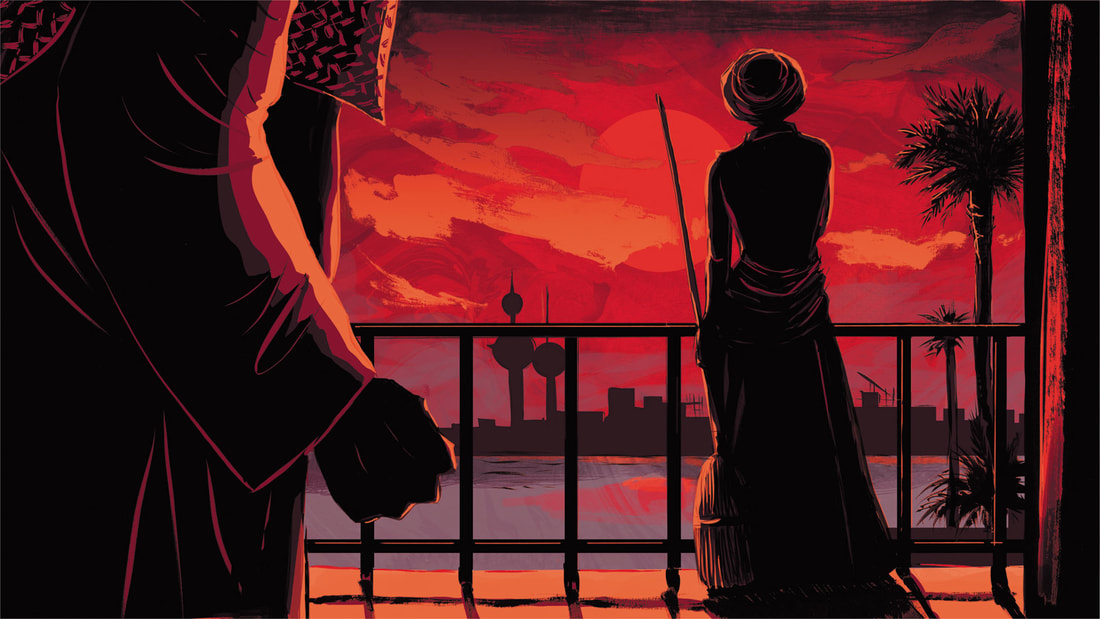 Born in Texas and now based in Beirut, Brady Black is an artist working primarily in pen, ink and watercolour with a focus on direct observational reportage illustration. 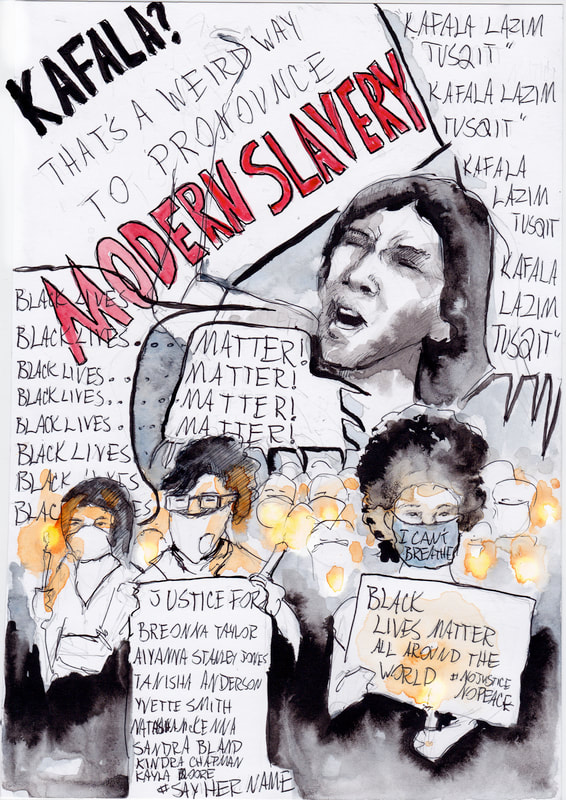 Chuck Todd is an award-winning illustrator and visual journalist based in the San Francisco Bay Area. His artwork and illustrations have been featured the Global Press Journal, The Sunday Times (UK) and more.

- illustration for Global Press Journal article on how workers from Nepal face difficult conditions and are often trapped working in countries like Qatar- 2017
- www.chucktodd.net 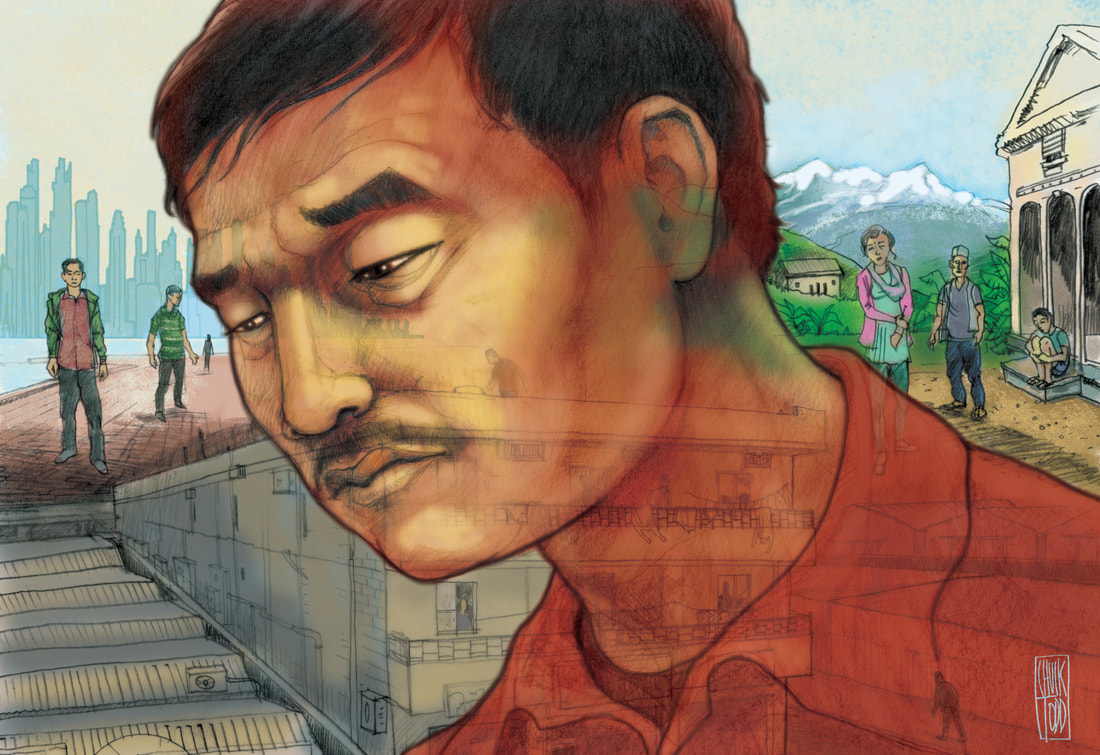 An artist and illustrator born in Beirut, Rawane Issa is currently studying Computer Science at Boston University.
​
- illustration for Addis Standard article The Lebanese Revolution Must Abolish the Kafala System - 2019 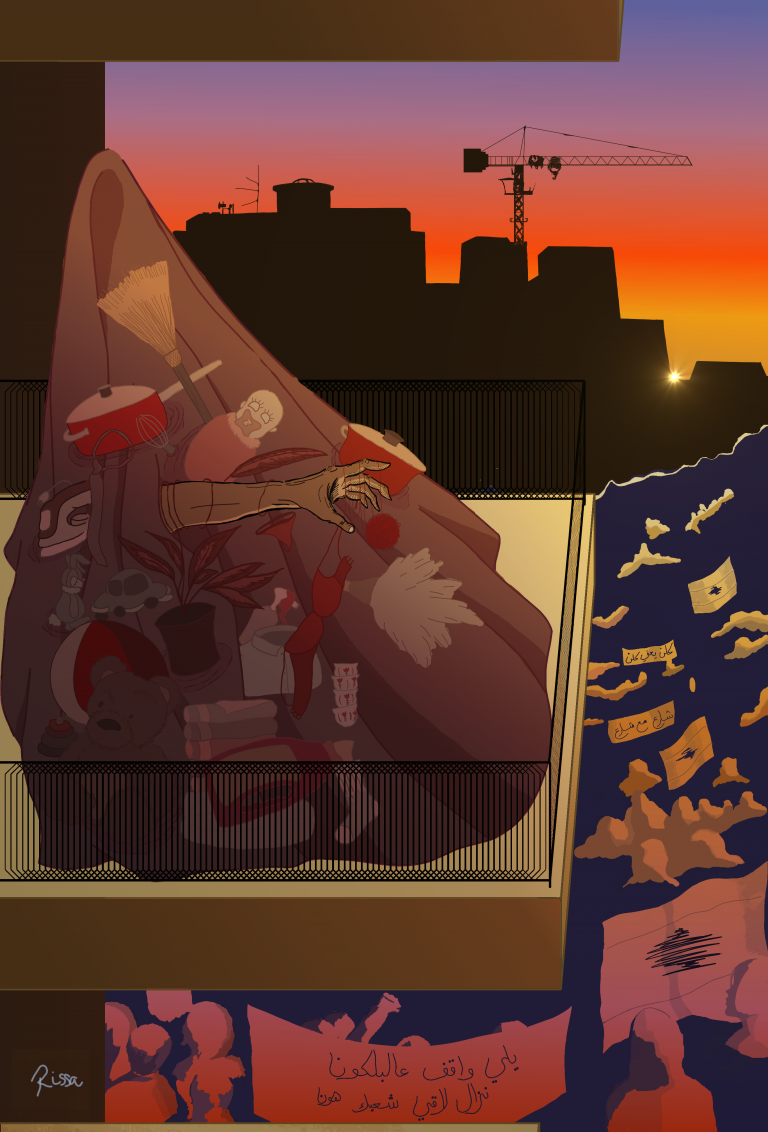 Hanna Barczyk is a New York-based illustrator whose pieces have appeared in The New York Times, The New Yorker, The Wall Street Journal, the Washington Post, The Economist and other publications. The work below is entitled Human Trafficking Maze. 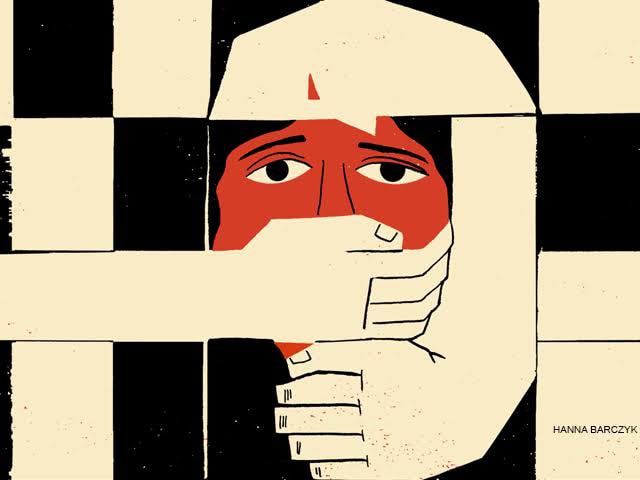 liked this? Then why not check out: