Station Electric is an online exhibition of radio work curated by Tse Tse Fly Middle East celebrating the fourth anniversary of our first radio programme broadcast on UK arts station Resonance EXTRA on January 30th 2016 while we were still based in the UAE. Listed below, the selection features discourse on the key themes of social politics with programmes and podcasts that approach human rights and freedom of speech from unique perspectives. Station Electric supports In Place of War, the global organization that uses creativity as a tool for positive change. 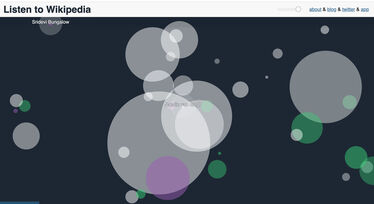 ​The Sound of Wikipedia Being Edited Live

Maintained by volunteers worldwide, Wikipedia is a triumph of free speech. And you can listen to the sound of Wikipedia's recent changes feed live online. Bells indicate additions and string plucks indicate subtractions. Pitch changes according to the size of the edit; the larger the edit, the deeper the note. Green circles show edits from unregistered contributors, and purple circles mark edits performed by automated bots. Listen here > 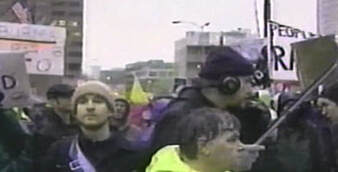 A 2012 American radio documentary that discusses Ray Bradbury’s 1953 novel Fahrenheit 451. The book took its name from the temperature at which paper catches fire, and tells the story of dystopian future in which all books are banned and any founds are burnt by firemen. The subtext the work examines notions of government control, censorship and restrictions on freedom of speech. Listen here > 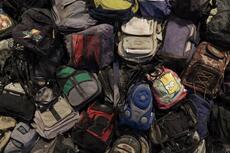 In researching border-crosser deaths in the Arizona desert, anthropologist Jason De Leóne noticed that, sometime in the late-1990s, the number of migrant deaths shot up dramatically and have stayed high since. Jason traced this increase to a Border Patrol policy still in effect, called ‘Prevention Through Deterrence’. Made in 2018, Border Trilogy examines the very human cost of migration and migrants. 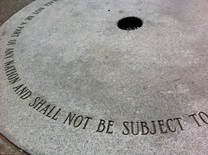 ​​The Invisible Monument to Free Speech

In 1989 the Berkeley Art Project held a competition to create a monument to commemorate the 25th anniversary of the Free Speech Movement, which began on the University of California Berkeley Campus in 1964. The winning design is an invisible sculpture that creates a small space completely free from laws or jurisdiction. Listen to the story behind it here > 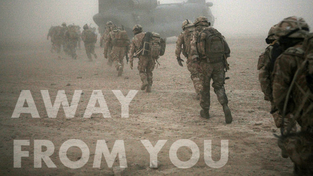 Away From You – The Story of the Afghan Interpreters

2018 documentary about Afghan interpreters recruited by British forces during their time in Afghanistan. Working closely with personnel, they became not just interpreters but also cultural advisers and friends. A defence select committee report acknowledged ‘there is a broad consensus that the UK owes them a great ‘debt of gratitude.’  While grateful, many of the interpreters are ambivalent over whether the government has fulfilled the debt. Listen here >
Genderless Justice

2007 four-part series examining the use sexual violence against women as a global weapon of war and the need for justice. The testimonies featured are direct and hard-hitting. In times of war and peace, sexual violence against women is brutal. But the victims demand the right to speak and to be heard. They do not want to be dehumanised and victimised. Listen here >
The Imaginary Village

Despite several United Nations resolutions, and after years of ambiguous language, the United States has now endorsed Israel’s long-standing position: that a Palestinian return to the 1948 homeland is no longer an option. Journalist Sandy Tolan tells the story behind the right of return. Listen here >
An Exodus of Women

Thousands of women travel to the Middle East every year in search of work and an income to help their families back home.  This documentary talks to a selection of female workers from Sri Lanka, asking them why they leave, what they miss and what their lives have become. And how does their exodus affect the societal fabric they leave behind? Listen here >
Free Speech: Ten Principles for a Connected World

More of a lecture than a documentary, here political writer Timothy Garton Ash presents his ten guiding principles for a connected world, offering a manifesto for global free speech in the digital age. Ash illustrates his talk with examples from his own experience of China's censorship, the controversy around Charlie Hebdo and more, proposing a framework for civilized conflict in a world in which we are all becoming neighbours. Listen here >
Housing is a Human Right

A series of short, creatively-conceived radio documentaries that formed part of the exhibition of the same name in Seattle, USA in 2016.  Housing Is a Human Right takes its title from an animation artist Martha Rosler created in 1989 for the Spectacolor board in NYC's Times Square as a comment on the rise of homelessness in the US. Listen here >
Uncounted Civil Casualties in Iraq

2017. The American-led battle against the Islamic State has been hailed as the most precise air campaign in history. But its airstrikes have killed far more Iraqi civilians than anyone has acknowledged. Basim Razzo, a resident of ISIS-occupied Mosul, lost his family and his home in one of the airstrikes. Video shows a target hit with military precision. Why was Mr. Razzo’s home targeted? And how often does this happen? Listen here >
My Share of the Sky

Created in 2011 and awarded the Prix Europa, My Share of the Sky artfully captures the disorientation of seeking refuge in a new country. Working on her first radio documentary, journalist Sheida Jahanbin records her own experiences. Put together with imagination and style, this is documentary as a work of art. Listen here >
Pakistan Women on the Frontlines

Oscar-winning journalist, filmmaker and activist Sharmeen Obaid-Chinoy delivers the 2019 Sarfraz Pakistan Lecture. Pakistan, a deeply patriarchal society is rapidly changing and women are at the forefront. This lecture explores the ways in which women across the country are working on the grassroots level to create spheres of influence pushing back on archaic laws, age old practice and using the Internet to arm themselves to have a greater voice in society. Listen here >
The Journey to Jazz and Human Rights

Four part documentary with each episode focussing on the role of jazz in the fight for human rights: jazz’s role in the fight for civil rights, in economic rights and in women’s rights, and the music’s deployment around the world as a cultural weapon. Listen via the player below.
Majd Abdulghani: Diary of a Saudi Girl

Majd Abdulghani is a teenager living in Saudi Arabia, one of the most restrictive countries for women in the world. She wants to be a scientist. Her family wants to arrange her marriage.  From the age of 19 to 21, Majd has been chronicling her life with a microphone, taking us inside a society where the voices of women are rarely heard. Listen via the player below.
Radio Fresh Syria

A 2018 podcast from SOAS University of London’s SOAS Radio celebrating Radio Fresh in Syria and commemorating Syrian activist, journalist and founder of Radio Fresh FM, Raed Fares. Radio Fresh was established in 2013 in the north west of Syria as an instrument of truth, cutting through governmental and religious propaganda. Fares was assassinated in 2018, his killers never found. Listen via the player below.
​
London’s Pirate Pioneers

2015 documentary charting the history of pirate radio in London, tracing the story of the broadcasters through clips, music, contemporary news reports and interviews. From Radio Invicta and DBC, to JFM, Horizon and LWR, on to Kiss-FM and Starpoint before finishing the story with Centreforce and Fantasy-FM. Listen via the player below.
​
​Thanks for listening and keep fighting for human rights and freedom of speech.